ZiggyVisions: the world according to Ziggy!

And who is Ziggy? Fair question. The short answer: Ziggy is Richard Zeigler, of Anchorage Alaska.

Spectacular Historic "Before and After" Video

Ziggy has footage of the 1964 Fur Rondy Championship Sled Dog Race shot right here on 4th Avenue - that's the "before". Then comes the "after" - view the same place after the Big Earthquake devastated the town a short time later, in this rare footage shot on the streets ( or what was left of them) of downtown. Ziggy has posted a couple of trailers on YouTube, representing several hours of amazing film. You can watch them right here:

The Fur Rondy Race and Parade 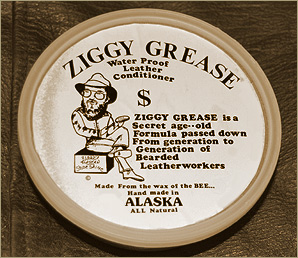 What does the master leatherworker, shoe repairer, furrier, and artist in leather use to take care of his hide? He uses Ziggy Grease! And now you can too.

Ziggy Grease is waterproof leather conditioner, hand made in Alaska, from a secret formula passed down through generations of bearded leatherworkers. It will keep your leather at it's best!

A tub of this great stuff is yours for only $8.00 and $3.50 shipping, a total of 11.50 per tub. That's to USA addresses, contact Ziggy for locations outside the United States.
No "handling". Ziggy just ships it, he doesn't "handle" it.

Note that the shopping cart is for small sales, and will total your cost up to four units. If you would like to buy more than four, call Ziggy and arrange a better shipping price.
(907) 258-7115